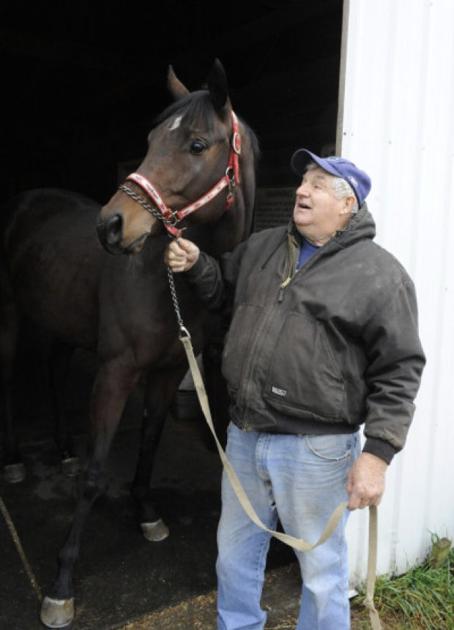 Our long time friend, brother, husband, father George Brown passed away and will be greatly missed.

Reprinted from the BloodHorse

George Brown, the longtime president of the Massachusetts Thoroughbred Breeders Association (MTBA) for more than 20 years and one of New England racing’s most ardent advocates, passed away late in the evening July 5 after a protracted battle with cancer. He was 82.

Brown, who was highly respected by horsemen, industry stakeholders, and regulators, was also the owner and trainer of many of the horses he bred at Briar Hill Farm in Rehoboth, Mass. He had been the owner and manager since 1964 of Briar Hill, which is the largest and one of the longest continually operating full-service Thoroughbred facilities in the Bay State and all of New England.

The operation, which offers stallion management and broodmare and foal care, is the region’s only farm with a one-quarter-mile breaking and training track, and it is situated on land that has been in the Brown family since 1850.

“I can say honestly that George was a great president, a great man and a great friend. He never stopped working to keep racing alive in Massachusetts and had hopes for the future. This is a truly sad day for New England racing. His fellow board members will miss him terribly. We will miss his wit and his ever-ready stream of jokes, which were all ‘G’ rated, of course,” said MTBA vice-president Gregg Rose.

“George was a great man. He didn’t just care about the guy with the big horse, he cared about the little guy, too. He cared about everybody. He was really and truly a good man,” said New England Horsemen’s Benevolent & Protective Association President Anthony Spadea Jr., who first bred horses at Brown’s farm 30 years ago. “He never had a lot of luck with his own horses, but because of that he still tried as hard as he could to make the program work for everybody. He never wanted to see anybody get hurt. He never held a grudge against anybody.”

Brown’s belief in the survival of New England racing never wavered despite the many setbacks and severe blows dealt to the industry in recent years. After the Massachusetts Gaming Commission denied the sole Boston-area full casino license to Mohegan Sun in 2014 , which had proposed to develop a $1.75 million project at Suffolk Downs, and track owners subsequently declared their intent to end live racing there, Brown teamed with the NEHBPA board members to develop a viable alternative racetrack.

Following the 2017 sale of the Suffolk Downs property to a real-estate developer, Brown and the MTBA formed a three-way partnership with the NEHBPA and Suffolk’s former owners, who own the racing and simulcasting licenses, to redevelop the old Great Barrington Fairgrounds and bring the shuttered Western Massachusetts track back to life for racing possibly as early as 2019.

“George was a true optimist who dedicated his life to Massachusetts racing and to the betterment of the state’s breeding program,” said Dr. Anthony Zizza, a MTBA board member. “His dream to have a permanent track in Massachusetts and for Mass-breds to have a true home lives on.”

Brown was also instrumental, as part of that triumvirate, in lobbying Massachusetts lawmakers to enact legislation favorable to the racing and breeding industry and the horsemen.

In his role as MTBA president, he was pivotal in the establishment of the program that allows Massachusetts-breds to run and still earn purses and state-bred incentives at Finger Lakes in upstate New York due to the extremely limited number of live racing days at Suffolk Downs as a consequence of the gaming commission’s 2014 decision.

Brown, who earned a Bachelor of Science in pre-veterinary studies at the University of Rhode Island in 1958, also enjoyed a successful career in academia. He was a science teacher in the East Providence, R.I. school system from 1967 to 1989 and also coached the baseball teams.

He is survived by his wife and right-hand at Briar Hill, Arlene, son Christopher Brown, step-daughter Donna Pereira, step-son Michael Cram, six grandchildren, five great-grandchildren, and a sister, Beverly Robertson. He was pre-deceased by his son, Derek Brown. His funeral will be held on Wednesday, July 11 at 9:00 AM at the Perry-McStay Funeral Home in East Providence, R.I. with a mass of Christian burial in Our Lady of Mount Carmel Church in Seekonk, Mass. Calling hours at the funeral home are Tuesday, July 10 from 4 to 8 PM.

A memorial service and celebration of his life is planned for August. In honor of Brown and his many contributions to the industry, flags will fly at half-mast at Suffolk Downs, which will offer live racing July 7-8 as part of the 2018 six-day meet.